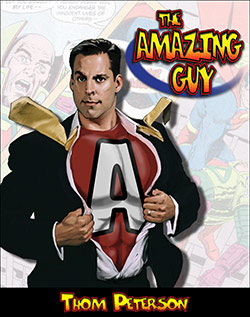 Thom was born in Wisconsin, in the upper most part of the centre of the United States in 1965. He started performing magic at the age of 5. In 1985 he attended the University of Wisconsin. While there, he began to perform shows to pay for his schooling. Upon graduation, he decided to continue to perform full time, and has been at it ever since.
Thom has been featured in numerous magic magazines in Europe, including being featured on the cover of the very well respected French magazine, l’illusionniste.
Thom has produced two teaching magic videos (The Amazing Guy, and Sucker Punch), as well as other marketed effects including Casino Cut Card, and SnapShot.
Thom is a proud member of the British Magical Society (currently the close up champion), as well as the Magic Circle in London.